This learning disability is the impairment of a person’s handwriting ability and other fine motor skills, especially those related to the transcription of ideas and language on to paper. While the word dysgraphia is not widely known, the symptoms of the disorder and those who are afflicted by the condition are actually rather common, especially in young children just learning to read and write.

If you have a student struggling with dysgraphia, read on! We will explain dysgraphia, detail a number of different potential symptoms, and offer some strategies and methods for overcoming this disability.

Dysgraphia is a condition that causes difficulty with handwriting and written expression. A person who suffers from this learning disorder may experience problems such as sloppy handwriting, inconsistent spacing, poor spelling, and the inability to write and think at the same time. For children with dysgraphia, these traits in their writing can indicate a serious struggle to put thoughts to paper, rather than a lack of commitment or effort. 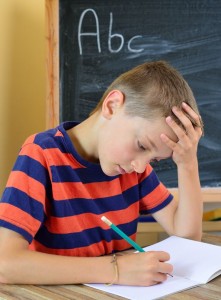 Students with dysgraphia struggle with expressing themselves on paper, a skill that many of us take for granted.

An important thing to note about dysgraphia, is that the term is not used universally amongst experts and institutions. It is common for psychologists and teachers to use the word dysgraphia as a sort of short hand for what the Individuals with Disabilities Education Act (IDEA), calls an “impairment in written expression.”

Typically, before a person begins writing, they first must first retrieve information from short-term or long-term memory, and then organize it to be either typed or handwritten. However, for someone with dysgraphia this process is not so easy on one of the following likely occurs:

In either case, experts agree that dysgraphia is a neurological disorder that is rooted in a person’s brain chemistry. Unfortunately, children who display consistent difficulty with writing and organizing their thoughts on paper are often accused of being lazy or not trying hard enough. In fact, these are precisely the children that should be evaluated to determine whether or not they might suffer from dysgraphia.

In order to determine whether you or a loved one may be suffering from dysgraphia, it is helpful to evaluate the writing in question under the auspices of the following six categories.

How to Treat Dysgraphia

The first step in treating dysgraphia is to identify the signs and seek a professional diagnoses. The symptoms detailed above will vary depending on the person’s age, but will generally start to show while learning to read and write as a child. This disorder is most commonly identified by licensed psychologists who specialize in learning disabilities. These professionals will likely administer academic assessments, reading evaluations, and writing tests.

If you or a loved one are diagnosed with dysgraphia, it is important to realize that, while it is a lifelong condition, there are many proven strategies and tools that can help those who are afflicted by this disability improve their writing skills. These options include but are not limited to:

These are just a few of the many ways that we here at Integrated Learning Academy would suggest for dealing with this disability. If your child is diagnosed with dysgraphia and qualifies for special educational services, it is recommended that you construct an IEP or Individual Learning Plan in collaboration with the school. This will help determine the specific classroom needs of your child, and may include additional instruction in reading and handwriting as well as a personalized approach to new accommodations, modifications, and remediation.

Instead of trying all of these strategies at once, try just a few to start out with, and then eliminate those that don’t seem to yield any real results. It is crucial to remember to praise your child for genuine effort and signs of true progress. This will likely motivate them to keep building stronger reading and writing skills. It is common for children overcome and work around their writing difficulties, and with support and proper acknowledgement, so too can your child.

The brain–body connection in relationship to the student suffering from dysgraphia cannot be overlooked, nor overemphasized in light of present day brain neuroplasticity and neurogenesis research.

We know that nerve networks are formed through movement and touch.  Reading a book requires subtle eye movement as well as subtle listening;  just like kicking a ball requires large motor movements.  With Integrated Learning Academy’s brain based tutoring program, the physical skills of learning through experiencing Brain Gym processes and exercises, weaved into multi-sensory direct curriculum instruction, are the ticket to ease and connection as well as developing the physical skills necessary for developing strong writing skills.

What is multi-sensory learning?

It is the simultaneous use of the visual, auditory, and kinesthetic/tactile pathways in the brain to enhance memory and learning. You’d be amazed at the difference intentional movement (Brain Gym) makes in one’s ability to put thoughts on the page and express themselves in written form.

Who wants to keep doing something over and over that is not fun?

Difficulty with written language has a life changing impact on individuals with dysgraphia, their families and communities. Dysgraphia does NOT define a person; there are numerous success stories for those who suffer from the condition. For many with dysgraphia their difficulty learning to read and write takes its toll on their self image and they begin to believe they are dumb or stupid. Nothing could be further from the truth!